The art of modern floral design is the subject of a new exhibition showcasing the work of Thailand’s acclaimed floral artist, Sakul Intakul, at Tamarind Village Chiang Mai. 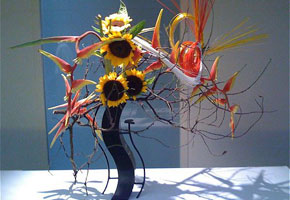 Entitled ‘FlorESSENCE: The Essence of Modern Flower Design’, the exhibition will run between 19th February until 31st May 2011 and will feature a series of striking photographic images of the designer’s work and a multi-piece Lanna (Northern Thai) contemporary floral installation created by Intakul himself for the occasion.

Intakul, whose career spans more than two decades and whose floral creations have graced palaces and some of the world’s most exclusive hotels and private residences, continues to challenge himself as an artist exploring his medium through his work and writings. The exhibition is being held in conjunction with the launch of Intakul’s book of the same name. The first volume in a planned two-part series, FlorESSENCE: follows on the artist’s other successful publications including Tropical Colours: The Art of Living With Tropical Flowers and Dok Mai Thai: The Flower Culture of Thailand.Unlike Intakul’s earlier books which focused on the visual appeal of flowers and their meaning in Thai culture, Intakul’s latest work moves in a new direction, revealing what he calls “the mathematical secrets” behind the art of floral design and its four essential components: The Vertical; The Horizontal; Cubes & Squares; and Circles & Spheres.

These four core principles, which underlie his body of work, give structure and visual cohesion to each arrangement. Revealed chapter by chapter through richly coloured, beautifully photographed images of the designer’s inspired creations, these linking principles add depth and meaning to the way that floral art and even nature itself can be appreciated according to Intakul.

When viewed through his eyes, a bamboo grove in Sagano, Japan becomes a “vertical wonderland” brought to life by the sunshine flickering through the canopy above while a lily pond evokes what he calls the “calm and quiet energy” of the horizontal. Cubes and circles, while less common are equally important in this ordered vision of his art. When seen in this manner, as a study in shape and form, his floral arrangements become a feast for the eyes as well as the mind.

The theme of Intakul’s book is also the inspiration for his upcoming exhibition at Tamarind Village Chiang Mai. The hotel’s whitewashed colonnade will form the backdrop for more than 25 photographic prints of his work drawn from the pages of FlorESSENCE which will be arranged according to his design principles. Taken by photographer Jirasak Thongyuak, each image, when seen individually is a work of art in its own right, showcasing Intakul’s unique flair for visual drama and thought-provoking beauty.

The exhibition will also be staged outdoors with the artist’s floral installation, comprised of 18 unique contemporary Lanna arrangements set in the hotel’s main courtyard around its namesake ‘Tamarind’ tree. In addition, in a nod to the setting in the heart of the old city of Chiang Mai, Intakul will create a separate display dedicated to the role of flowers in northern Thai culture. Here he will showcase a number of perfectly crafted, traditional floral offerings used for religious and ceremonial purposes and unique to the region such as bai sri and suay dok, accompanied by explanations of their meaning and symbolism.

When asked to comment on the hotel’s involvement with the exhibition, Claudine Triolo, director of marketing & communications for Tamarind Village commented that, “this is a unique opportunity for us to collaborate with one of Thailand’s most creative contemporary artists. We are always keen to showcase the work of talented individuals at Tamarind Village but especially those who find inspiration in the traditions of the past. We are honoured that Khun Sakul selected Tamarind Village as the venue for both the launch of his book and exhibition.”

Tamarind Village Chiang Mai will host an invitation-only opening reception to mark the book launch and the exhibition opening on February 19, 2011