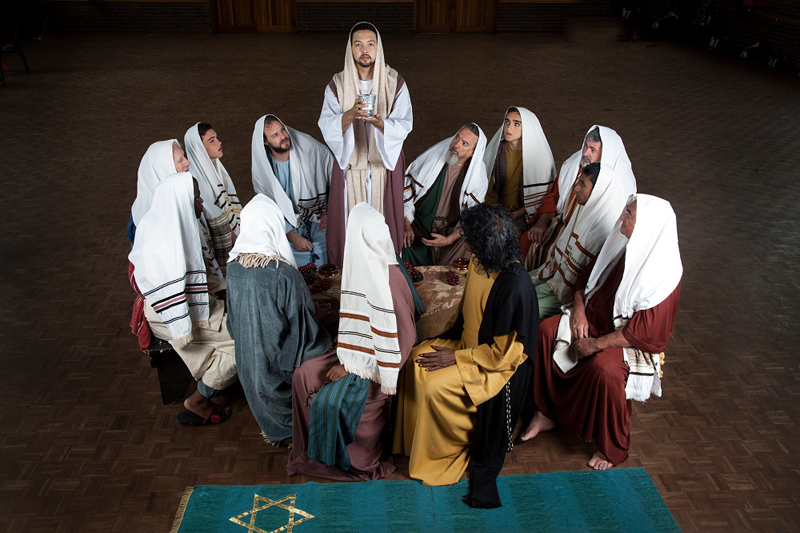 The Durban Catholic Players’ Guild will present the 15th Durban Passion Play at the Playhouse Drama Theatre from 25 March until 12 April.

The Passion Play strives to restore the true meaning of Easter. It is an epic scale dramatic production depicting Jesus’ passion, covering the final period of his life from his visit to Jerusalem to his execution by crucifixion and ending with the Resurrection. It is performed by a large cast who volunteer their time and skills as part of their Lenten preparations. The play involves seven months of commitment from a 150-plus cast who receive no remuneration.

The cast comprises an inter-denominational, inter-faith, multi-cultural, multi-lingual group of diverse people who vary in age from toddlers and teenagers to young adults and the more mature; able bodied and differently abled. There are also multi-generational family groups, with the older members having performed on multiple occasions (some of the cast members have performed in more than eight productions – which means they have been performing for more than 40 years!) and the younger performing in their first Passion Play.

This year there are two men who will share the role of the Christus: Dale Collings is a new cast member and is finding the role both challenging and deeply rewarding. Rob Paul played the Christus in the 2000 staging and is returning with a deeply devout understanding of the responsibility of the role.

The play is directed by Dawn Haynes and Derek Griffin who have been working on the script and training the actors for more than 18 months. Both agree that the hard work and hundreds of hours are well worth it!

The first Passion Play in Durban was performed in 1952, when the mayor and community of Oberammergau in Bavaria granted special permission to the Durban Catholic Players’ Guild to stage an abridged version of their world-famous production. What was first enacted in 1634 in Oberammergau was used in Durban as a means of celebrating the centenary of the arrival of the missionary Oblate priests of Mary Immaculate, who arrived in South Africa in 1852.

That first play, enacted at the Greyville Racecourse, was so successful that Durban’s Father Noel Coughlan travelled to Bavaria to gain permission for the Durban version of the play to be staged every five years. The Oberammergau village elders willingly obliged, seeing the play as a means of witnessing to the larger population of Southern Africa: Durban would become the “Oberammergau of Africa”.

It has now been staged in Durban every five years for the past 64 years. The Durban Passion Play was staged at the Greyville Racecourse, before moving to the Durban City Hall until 1997. More recently it has been performed at the Playhouse.

There are day-time and evening performances. Public booking is through Webtickets. Block bookings and entire performances can be purchased through Dominic Sandiah on 082 460 7677