“I believe in people, art, poetry, music, creativity and love … my art is an interaction between me and my surroundings.” – Wesley Pepper What is the meaning of art in the South Africa of the 21st Century? Wesley Pepper is answering that question by doing art, not theorising about it. The Johannesburg-based artist was […] Tony McGregor» Art

Hales Gallery is delighted to present Above and Below: Step Paintings 1990-2013, a solo show of works by British painter Basil Beattie. Beattie left the Royal Academy schools in 1961, when the trend in Britain was for American-influenced abstract expressionism and post-painterly abstraction. His initial works of the 1960s and early 70s absorbed these influences, but it was not long before Beattie abandoned a purely formal approach and... 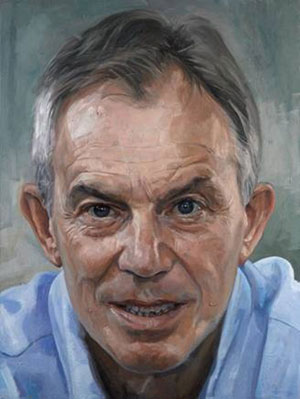 The National Portrait Gallery, London, has unveiled its most recent commissioned portrait, a painting of Tony Blair by artist Alastair Adams, President of the Royal Society of Portrait Painters, it was announced today, Friday 20 December 2013. The commission is in keeping with the National Portrait Gallery’s wish to acquire portraits of all former British Prime Ministers. The large oil painting (four feet by three) shows the...

Introducing Phil Burton Retroart – ART TO ENJOY EVERYDAY!! This art is not just for the art enthusiasts, but rather, Phil wants his art to appeal to everyone.  He loves to make people smile when they look at his work, and say, ” I like that!!” He also likes to create art that most people can afford.  For those who don’t have the cash to buy an original painting, Phil’s art is being reproduce on everyday items,...

Stair Sainty Gallery are proud to present the first major UK retrospective of the late Cuban-born, Spanish artist Federico Beltran-Masses. The exhibition will include his controversial nude Salome, which was painted in Paris in 1918 and exhibited at the XII Venice Biennale in 1920 in a pavilion dedicated solely to his paintings; there it earned the artist comparisons to the Venetian Masters. Critic Camille Mauclair waxed lyrical about...