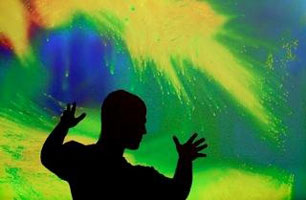 Yota Space today opened its doors to reveal one of the greatest collections of digital art ever assembled. Over 20 of the world’s most cutting edge digital artists including onedotzero and the legendary Brain Eno are exhibiting works, some of which have been commissioned especially for Yota, over five floors in a converted building in the heart of St Petersburg.

The event, which will run annually, has been created by Russian wireless 4G broadband company, Yota. It will be open to consumers for two weeks from 6th – 19th December. The festival brings together a never been seen before level of interactive digital art and brings many of Europe’s best artists to Russia for the first time.

Visitors enter to be greeted by ‘Volume’, a collaboration between design collective United Visual Artists (UVA) and 3D from Massive Attack, which consists of 47 columns of light, each with their own audio output. The visitor determines their own pathway through the columns affecting and creating their own unique journey through light, nature and space.

Guests will then receive a stunning and totally immersive sensory experience across a further four floors of installations and works that include:

* Brian Eno’s “77 Million Paintings” which provides a unique and almost infinite perspective for each visitor
* Chris Levine’s specially commissioned “Alright Now” installation which projects images to the observer’s peripheral vision
* In Jason Bruges’ specially commissioned “Peasouper” visitors will appear to float through the space as passers-by in the foggy streets of London
* onedotzero has taken over an entire floor to showcase a collection of handpicked artists. Works include a digital interactive photo-booth produced by Cassette Playa and Kin Design and works by Hellicar + Lewis, AntiVJ, Quayola and more
* United Visual Artists’ “Volume” is an immersive experience that was created in collaboration with 3D from Massive attack.
* The interactive Body Paint installation from MSA

The exhibition was launched with a multi-media party headlined by Grammy award nominated British electronic band Hot Chip. They were joined by up-and-coming acts Masters of Skweee and SCSI-9.

Yota has curated the event itself as a way to ensure that it stays at the cutting edge of contemporary culture and cultivate the creativity that sits at the heart of the brand.

‘Yota Space has been created as part of our mission to transform people’s lives by giving them access to new ideas from across the globe. Yota aims to be a company that inspires, so we’ve invested in bringing together some of the most inspirational people in the world for this event. We hope the people of St Petersburg enjoy what promises to be one of the most unique events that Europe has seen this year’ explains Dennis Sverdlov, Yota CEO.

“This is a great platform for digital art and music, which in my mind have a natural cohesion to one another. I am also delighted that it is being held in Russia as I have always had a connection with the country. As an art student my favourite period was Russian painting of the early 20th Century. I also lived in St Petersburg for a short while. This is the first time my work 77 Million Paintings will be seen in Russia, which combines art and music, my two great loves” said Brian Eno.