This art is not just for the art enthusiasts, but rather, Phil wants his art to appeal to everyone.  He loves to make people smile when they look at his work, and say, ” I like that!!”

He also likes to create art that most people can afford.  For those who don’t have the cash to buy an original painting, Phil’s art is being reproduce on everyday items, like mugs, greeting cards, posters, iPhone and iPad cases, and skins for many electronic devices, e.g., mobile/cell phones, tablets, Kindle and other readers, laptops, etc.  A perfect way to enjoy fantastic art.

About Phil and his painting style:

He has been painting for years.  After leaving school, he learned and mastered Showcard and Ticket Writing, and then went to be a professional Signwriter.  That was in the days when signwriters used a brush.  Then came all the digital technology!  Traditional signwriting was no longer popular.  To keep up with the trends, Phil needed to learn to produce digitally created signs, which he did.  However, wherever he could he still used the paintbrush, which he loves most.

Phil’s first attempt to paint pictures was about 15 years ago after he fell and broke his foot.  Not being able to do his normal work, he decided to put his paintbrush to work in a different way, hoping that this would bring in an income with selling art until he got back on his feet again.  Unfortunately,  it didn’t work.  He only sold a few paintings, then gave the rest away as gifts.  He decided not to try selling art again.  So when his foot healed, he got back to the signs which he is still doing.

However, due to recent downturn in the economy, and less work coming in, Phil got an urge to start painting again, but with a new vigor.    This time his inspiration has unleashed a fresh, new art style, with a touch of nostalgia.  Being a signwriter, Phil’s emphasis is on colours and design, with bold outlines.  This is very reminiscent of the seventies with the bright colours, surf and flowers.  Hence he has called it Retroart.

Phil lives on the Mid North Coast of New South Wales,  Australia.  He loves to surf, which is the subject of many of his paintings.  His work can be viewed, enjoyed and purchased online at www.phretroart.com. 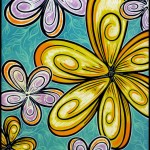 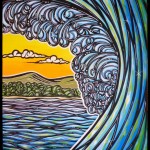 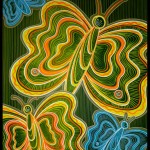 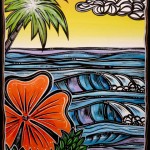 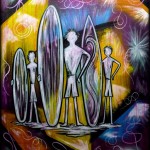 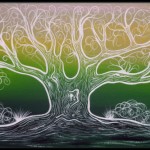 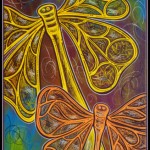 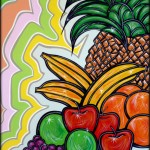 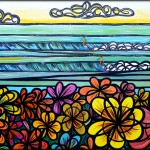 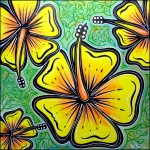