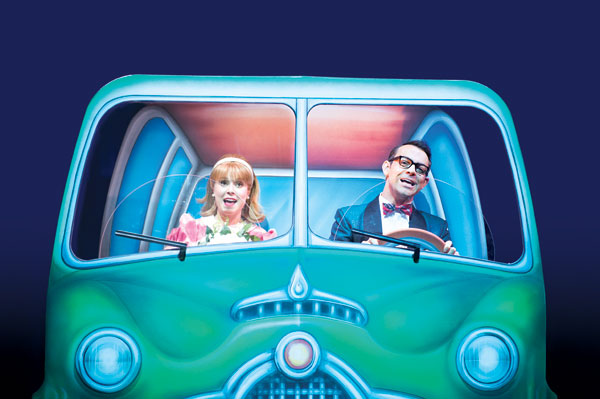 Strictly Come Dancing finalist and Tracy Beaker star Dani Harmer is to play the role of Janet in The Rocky Horror Show 40th Anniversary production which is coming to His Majesty’s Theatre in Aberdeen in September.

And Ben Forster, who won the ITV1 series Superstar and then went on to play the lead in Jesus Christ Superstar, will star alongside her in the role of Brad while West End actor Oliver Thornton stars as the lead character Frank ‘n’ Furter and Philip Franks, from The Darling Buds of May and Heartbeat, plays the Narrator.

The show begins a week-long run at HMT on Monday, September 9, and tickets are available online at www.boxofficeaberdeen.com, by phone at 01224 641122 and at Aberdeen Box Office at the Music Hall and His Majesty’s Theatre.

Since its first appearance at the Royal Court Theatre in June 1973, Richard O’Brien’s The Rocky Horror Show has been performed worldwide in over 30 countries in every continent and has been translated into more than 20 languages.

To celebrate the 40th anniversary, director Christopher Luscombe has created a new production for a year-long UK tour.

This musical extravaganza will feature all of its famous musical classics including Science Fiction/Double Feature, Dammit Janet and of course, the timeless floor-filler, The Time-Warp.

The Rocky Horror Show tells the story of Brad and his fiancée Janet, two squeaky clean college kids who meet Dr Frank ’n’ Furter by chance when their car breaks down outside his house, while on their way to visit their former college professor.

With timeless songs and outrageous outfits, it’s a guaranteed party, which famously combines science-fiction, horror, comedy and music and encourages audience participation meaning, of course, getting dressed in the most outrageous fancy dress.

Many stars, including Russell Crowe, Tim Curry, Jerry Springer and Meatloaf have appeared in The Rocky Horror Show over the past 40 years.