The Ugly Sisters on National Tour 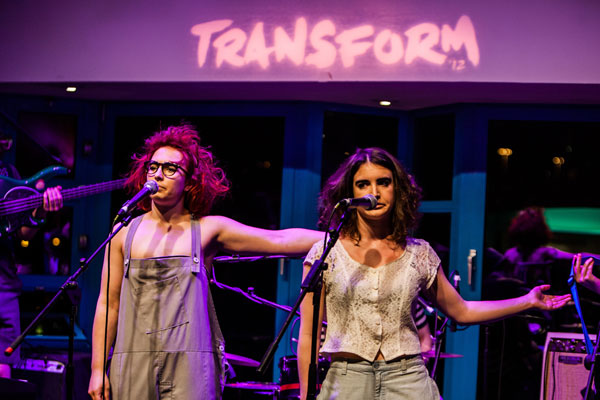 “I’m tired of these baby bumps, vag flashes, muffintops / Where are the news-worthy cocks?”

Scotsman Fringe First winners (2010 and 2011) and new West Yorkshire Playhouse associate company RashDash tell the story of the most notorious villains in fairy-tale history. Influenced by the Object report in 2011 following the Leveson enquiry, The Ugly Sisters explores themes of objectification and sexism in the media.

Sisters Emerald and Pearl are forced to move in with their mum’s weird new husband and are cast aside in favour of their new and perfect step-sister. When they’re selected for reality show You Shall Go To The Ball, the sisters try to win back the love of their mother, Prince Frederick and the whole country. With clanging keys, thumping drums and violent vocals, The Ugly Sisters is a harsh look at media representations and public approval.

The Object report Just The Women looked at 11 publications over a fortnight, and found over 1,300 pieces of editorial and images which illustrated different forms of sexism in the media. Further study showed that 66% of teenage girls would consider plastic surgery. In April 2013, breast lift and buttock lifts were 69% and 114% up since 2000. Upper arm lifts were up by 4,473%. The report “finds it common for certain aspects of the press to reproduce unrealistic and often contradictory images of feminine beauty, and then to scrutinise women on the basis of how they conform to these often unattainable ideals.”

RashDash was formed in 2008 by Abbi Greenland and Helen Goalen. The company evolved from a shared desire to make work that is physically exciting, experimental and challenging for performers and audiences, mixing story, song, music and dance. At the heart of the company is a strong, young female identity. Previous shows include Another Someone (Scotsman Fringe First winner 2010) and Scary Gorgeous (Scotsman Fringe First winner 2011, and MTM Awards for Best Book and Innovation in Musical Theatre). 2012 saw the company create their first outdoor performance Set Fire to Everything!!! for Lyric Hammersmith, Greenwich + Docklands International Festival, Latitude and Watford Imagine. They were commissioned again this year, and have just finished their second outdoor show the Frenzy. The Ugly Sisters was first performed at St Stephen’s, Northern Stage’s Edinburgh Fringe venue, in 2012 where it was Nominated for Total Theatre award for Innovation, Experimentation and Playing with Form, and nominated for MTM awards for Best Book, The Tods Murray Award for Best New Musical, Innovation in Musical Theatre and Best Music.