The Footsteps Of Lakeland’s Artists 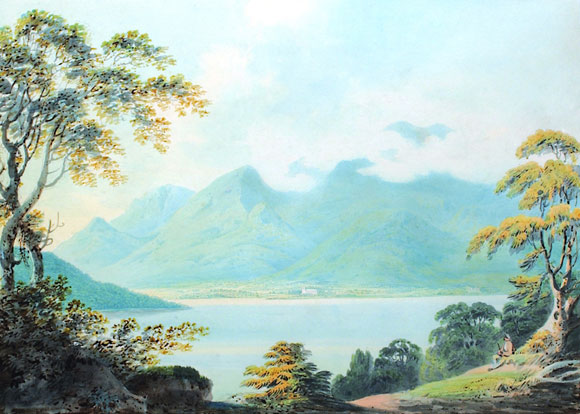 Visitors to a Dove Cottage and Wordsworth Museum exhibition, in Grasmere in The Lake District, can marvel at the resilience of their parasol-touting, well-to-do travelling predecessors, who would endure lengthy journeys, with boulders strewn in their path and the ever-present possibility of an overturned carriage, just to reach their destination!

The Savage Grandeur and Noblest Thoughts exhibition highlights the phenomenon of Picturesque Tourism, which gripped Britain once the Napoleonic Wars had cut off polite society from the ‘Grand Tour’ on the Continent.

It fuses together art and literature from the period 1750-1820 and includes works by artists, writers, satirists, poets and guidebook writers who fed a demand for visual and literary representations and descriptions of the area. These creative brains recognised and developed a market for what might now be regarded as the full colour, prestige coffee table book, a souvenir painting, or the equivalent of a BBC Countryfile feature.

Wordsworth’s own tourism publication ‘Guide to the Lakes’ has been the impetus behind the exhibition, as it celebrates its 200th anniversary of publication this year.

Etchings, engravings, paintings, print and prose are all on show, with examples of how artists slightly skewed the representation of the area, to sell their works more easily, satisfy the desires of patrons, create satirical commentary on the early Lakes visitors and convey the essence of the newly ‘in vogue’ area.

Picturesque Tourism was the catalyst for changes in artistic techniques and the medium used in the production of works of art. The exhibition highlights the growth in the popularity of engravings, aquatint, mezzotint, bodycolour and watercolours – the latter having formerly been viewed as a medium suitable only for genteel ladies!

It includes Constable’s Hellvellyn – his only print of the Lake District – and also features works from a variety of artists including Laporte, Chubbard, Sunderland, Nicholson, Farington, Walmsley and Gainsborough. All are from the Wordsworth Museum’s own collection. Interestingly, it boasts watercolours by Girtin, who died in his mid 20s, and of whom Turner remarked: “If Girtin had lived, I should have starved”.

Visitors can view works picturing scenes from locations around the Lake District and use these as a launch pad from which to explore the featured places and beauty spots themselves. Locations represented include Windermere, Ullswater, Townend, Rydal Falls, Bowness and Furness Abbey, all just a short drive from Grasmere.

Those wishing to experience this unique insight into Picturesque Tourism can visit the Savage Grandeur and Noblest Thoughts exhibition (to June 12, 2011) seven days a week, between 9.30 and 17.30 in summer and to 16.30 in winter, with last admission at 17.00 or 16.00 respectively.

Dove Cottage and the Wordsworth Museum is closed on Christmas Eve, Christmas Day and Boxing Day and between January 5 and February 4 2011 for yearly maintenance.

Admission costs £7.50 for an adult, £4.50 for a child and £17.20 for one or two adults and up to three children and covers both Dove Cottage and Wordsworth Museum & Art Gallery entrance. More details are at www.wordsworth.org.uk