China at The Lingotto

Home » Exhibition » China at The Lingotto

Virtual worlds and used soap to describe the drama of postmodernism man. But also to search for a dialogue between past and present. In Turin you breathe China… 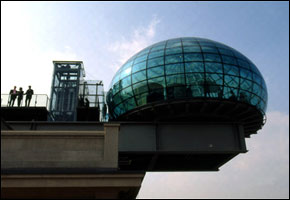 China at The Lingotto

CHINA AT THE LINGOTTO
Until 27.Feb.2011
TURIN, Pinacoteca Agnelli

China Power Station: Part II arises from the collaboration between Ginevra Elkann and the owners of the Astrup Fearnley Museum. The works on display at the Pinacoteca Agnelli are the result of an intelligent selection from
the collection of the Oslo Museum dedicated to contemporary Chinese art.

With the exception of the two “masters” Huang Yong Ping and Cai Guo-Qiang, the exhibition focuses on young cosmopolitan artists, surprisingly critical of the modern era and its obvious contradictions. “Globalization” is
therefore the key word around which most of the experiments are formed, gently swaying between East and West.
Even before going through to the Pinacoteca, you can admire the forceful display of Cai Guo-Qiang’s (The Eagle has arrived! 2001) upturned boat, almost anthropomorphic in its “pride” and ready to welcome the visitor to
the North ramp of the Lingotto. A great and effective way to bring the observer closer to the emotional dimensions of aesthetics. The monumental impact is recreated in the main hall with Huang Yong Ping’s Colosseum, a
striking mass in ceramic and mould built in 2007, populated by luxuriant tropical plants.

However, it is the area dedicated to Xu Zhen that really encourages one to think. The artist depicts the postmodern threat of terror by creating a simulated attack, exemplified by images and by a giant mobile installation of the main symbols of war. Parody, even before representation; off-road vehicles and tanks are here eloquent witnesses to the contemporary drama. An unresolved drama and, because of this, a fascinating one.

The newspaper and latex strings of Xue Tao (Rope Coil, 2006) lead the visitor to the space below, but not without obstacles. Mysterious dark curtains let you envisage the transition to audiovisual, with the promise of an intriguing experience. Inside, a combination of electro-pop music and soft lighting concur to the enhancement of a charismatic “glass cinema”, whilst Cao Fei’s (i.Mirror: a Second Life City, 2007) video draws the audience towards a close virtuality with the interpreter and is theatrically poised between being and appearing to be.

On the ground floor, it is essential to spend a quarter of an hour to admire the hypnotic perfection of the city of Liu Wei (Love it, Bite it, 2007). Made only of cow and pork skin, it carries on the tradition of the factories, at the same time employing new compositional techniques, celebrating the combination, not just cerebral, but also spiritual, of the
long-established stylistic methods and new additions. This is achieved without ever betraying the ancient and sacred origins of the Country, an attitude nowadays only equalled by the root of the greatest Indian art.
Meanwhile, acoustic installations, used soap, memories in a suitcase and three-dimensional metaphors inhabit the display space with poetic eclecticism. Even without Zhang Huan, this is indeed China.