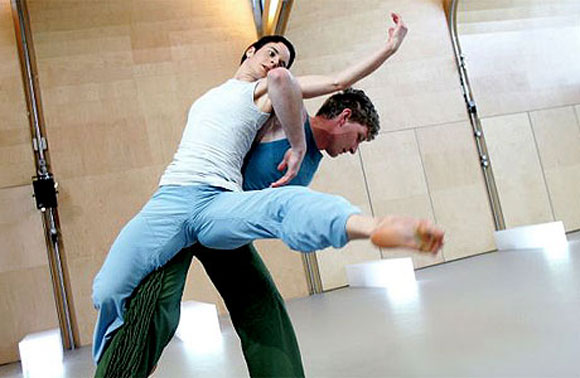 The acclaimed Siobhan Davies Dance Company will be performing at Turner Contemporary as part of a Late Night Live Weekend Special from Friday 30 March to Sunday 1 April.

The company will perform a series of pieces across the three day period, all taken from their work called ROTOR (2010). ROTOR is an ensemble of works created by eight artists in response to Siobhan Davies’ film The Score. It includes performances, sound installation and artworks.

The Score will feature over the weekend, projected onto the wall of the Foyle Rooms, alongside the pieces that form ROTOR:
• Live Feed by playwright E V Crowe and directed by Ramin Gray is a collaboration with Siobhan Davies Dance, and is performed by the dancers who address the process of agreeing and maintaining the movement itself.
• A Series of Appointments is a live work by Siobhan Davies where she has developed the choreography of her earlier work The Score into a layered and complex design.
• I’m Going to Show You again by E V Crowe, is a recorded monologue performed by the actor Justin Salinger, about teaching someone how to tie a knot.
• And finally, composer Matteo Fargion pursues his love of rhythm, counterpoint and the absurd. In Songbook, space takes a back seat and time takes over. The dancers, stationed in a row behind their music stands like opera singers at a rehearsal, make their separate perilous journeys through a 33 page solo score for too many words, sounds and movements.

‘The creations of the British choreographer Siobhan Davies have always been marked by an intense thoughtfulness, an interest not only in movement itself but in the ideas it can spark…rich and stimulating and deserves to be seen by many…Engrossing’

The Daily Telegraph on ROTOR

Please find below a full programme of events throughout the Late Night Live Weekend special:

Performances start at 12pm, 2pm and 4pm. Each performance time will include:
– A Series of Appointments, Siobhan Davies
– Live Feed, E V Crowe
– Songbook, Matteo Fargion
– The Score
– Sound Installation; The True Story of Someone Putt Only Half Heard, Alice Oswald
– I’m Going to Show You, E V Crow