They belong to different generations, so much so that they could be father and son. Two Britons have set up an exhibition in Rome under the same roof, in the context of a spate of autumn-winter events at Macro.

The body, this unknown. In his research spanning a period of 30 years Antony Gormley (London 1950) has never stopped looking into the relationship between the human body and the surrounding space, moving from drawing to sculpture. If, at first, he used to favour the ironic representation of man as controlled from within by a little puppet (Mansion, 1982) or shapd like a sort of leafy shrub (Untitled, 1983), in time he proceeded to create abstract forms in the attempt to establish a connection between the human body and other subjects. 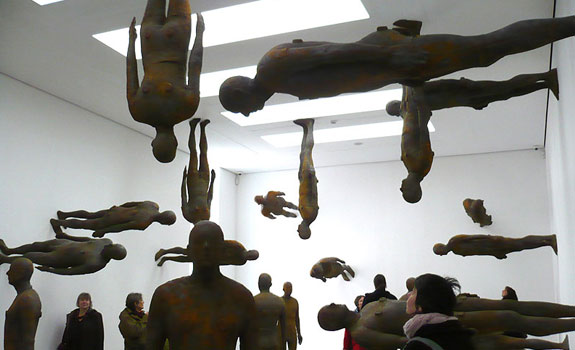 The light, for instance, that casts the body’s shadow into space through the technique of charcoal and casein on paper (series Body & Light, 1990-96) or the soul, the inner body caught in the interplay of positives and negatives achievedby pressing the etching on textured paper (series Body & Soul, 1990).

Often the drawing seems unable to contain itself, wanting to get out of the two-dimensional plane, rotates dizzily to gain strength and so free itself from the sheet of paper (series Clearing, 2005-09). Miraculously, this indeed happens in the four works depicting the transition of the stroke from paper to real space. Steel wires that become living matter, that react, that coil up in a whirl (Feeling Material XXXVI, 2008). Two-dimentional or three-dimensional, drawing or sculpture whatever it may be, the dynamic protagonist is always the linea, the stroke: to draw the space or to let the space draw.

Whereby the old hand Gormley conquers space and fills it with his lines, young Jamie Shovlin (Leicester, 1978; lives in London) aims at filling it with objects and visions in the pursuit of a dialogue between what is true and what is just appearance. As demonstrated in the homage he pays to his favourite movie “Hiker Meat” directed by Jesus Rinzoli in the ’70s. Like the keen collector he is, he exhibits whatever he has been able to obtain of the film: the actors’ costumes, stage objects, the script, the trailers. In short, a cult movie of the “exploitation” period, a B-movie with a nostalgic flavour, and rich in humour and Tarantinian atmosphere.

Everything as if already seen before, everything as if it were real. Pity that it isn’t, because the film “Hiker Meat” was never shot, those maniacally exhibited objects belong neither to that picture nor to the past that they were meant to evoke. We are confronted with forged “memorabilia”, fake relics of a past that never was to celebrate an event that never took place. Even the tormented story of the film’s production and of the cuts imposed by censorship is pure fiction.

Truly transient is the confine between reality and fantasy, between truth and falsehood, between past and present, of a work similar to many others but that has never existed. The very plausible story of the film that never was.