The exhibition will include his controversial nude Salome, which was painted in Paris in 1918 and exhibited at the XII Venice Biennale in 1920 in a pavilion dedicated solely to his paintings; there it earned the artist comparisons to the Venetian Masters. Critic Camille Mauclair waxed lyrical about the talents of Beltrán-Masses: ‘like Veronese, like Tiepolo, like Tintoretto…this Spaniard has all the chromatic delight of the Venetian masters…a picture is lyrical drama.’

In 1916 King Alfonso XIII of Spain had attended an exhibition of Beltrán-Masses’s in Madrid and become an early patron. Reports of Beltrán’s fame reached the United States by 1921, with a paragraph in American Art News mentioning the success of Beltrán’s first Paris exhibition, and in 1924 he was invited to exhibit at the Wildenstein galleries in New York, which was followed by a sell-out exhibition in Palm Beach, and a Los Angeles exhibition in 1925.

Beltrán-Masses found favour in Hollywood, and the exhibition at Stair Sainty Gallery includes portraits of screen legends Joan Crawford and Douglas Fairbanks Jr., while the Dream of Don Juan shows Rudolph Valentino surrounded by clamouring women. Beltran-Masses associated with some of the most high profile personalities of the Golden Age of Hollywood including; Charlie Chaplin, newspaper columnist Louella Parsons, actress Merle Oberon, screen legend Douglas Fairbanks Senior, Gloria Swanson, actress Marion Davies and her lover William Randolph Hearst (who purchased four paintings by the artist and whose portrait he painted).

Beltrán’s later connections with French Cinema were cemented by the inclusion of twelve paintings and three drawings in the 1934 film, Le Rosairé, staged by Gaston Ravel and Tony Lekain.

Whilst Beltrán’s portrait subjects included Kings and Princes, Hollywood stars, and leaders of high society on both sides of the Atlantic, he was particularly sought out by women who had unashamedly rejected convention. This exhibition includes portraits of; Mrs Anthony de Rothschild (née Yvonne Cahen d’Anvers and mother of Sir Evelyn de Rothschild, who lent the painting to the exhibition), who meets the gaze of the viewer whilst clothed in the attire of an Egyptian princess; Aviator and socialite Mme. Bonnardel Countess Montgomery whose Chanel dress is in the Metropolitan Museum, NYC; and the fashionable Cheongsam- wearing Chinese heiress Mme. Wellington Koo, who was married to one of the leading figures in Chinese politics of the period, and often graced the pages of Vogue in the 20s and 30s.

He also painted allegories with eroticised beauties, languorously posed in nocturnal settings characterised by an aura of mystery. The first such essay, a 1915 portrait of a nude lesbian Spanish countess wearing nothing but a white mantilla, seated with two, fully clothed, female companions (Maja Marquesa), was refused by the Jury of the Spanish equivalent of the Salon. An outcry of support by the press and fellow artists ensued, but Beltrán moved to libertine Paris soon after, where he lived and worked for the next thirty years. In another erotically charged painting, the 1929 Granadas, we find Beltrán’s vision of a semi-naked Eve, with a musician under a starry Andalusian sky. Born in Cuba and raised in Barcelona, the painter’s Spanish heritage would influence his oeuvre deeply.

His paintings are rich with musical and poetic references as well as dance. The exhibition features a portrait of the celebrated Ballet Russes dancer Alicia Nikitina (mistress of the 1 st Viscount Rothermere). Such was Beltrán’s fame that in 1926 Martha Graham titled a dance at her first public performance in New York Portrait – Beltrán-Masses. He also painted the innovative Spanish dancer Carmen Tórtola Valencia as the Maja Maldita, a painting widely reproduced at the time and included in this exhibition.

Beltrán-Masses was showered with public honours and was a member of the Academies of San Fernando in Madrid, San Jorge in Barcelona and San Luís in Zaragoza, as well as those of Lisbon, Cordóba and Málaga, and also a member of the French Institut and Académie des Beaux Arts in Paris. His paintings can be found in major museum collections including the; Musée de l’Art Moderne at the Centre Pompidou; Reina Sofia in Madrid; Civic Museum in Ciudad Real; Casa Lis in Salamanca; and the Cuban National Museum of Fine Arts, Havana. The recent revival of interest and our knowledge of Beltrán-Masses owes much to the care with which his heirs retained not only the paintings they had inherited but an extensive archive, which includes many photographs from the 1920s and 1930s as well as exhibition catalogues, reviews and mementoes.

This exhibition provides an opportunity to reintroduce Federico Beltrán-Masses to the international market some seventy years after the artist’s last London show. A catalogue raisonné of the artist is presently in preparation and the gallery worked with the foremost scholar on Beltrán-Masses for the exhibition catalogue. 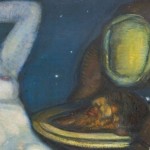