The Barnard Gallery is delighted to present an exhibition of paintings by Barry Sullivan. At first sight his work appears vaguely reminiscent of the genre of naive, or outsider, art. But a closer reading uncovers a clever ploy on Sullivan’s part to draw the viewer into fantastical vistas where all is not what it seems, where incongruities of scale, unexpected juxtapositions and cunning compositional devices evoke multiple narratives.

Titled ‘Another Man’s Vine’ the show evokes a sense of appropriation. Through whimsical, symbolically rich imagery Sullivan evokes a world of contradiction and ambiguity. Depicted against large expanses of emptiness, his Lilliputian “characters” – be they bureaucrats or minstrels – play out mini-pageants in which they seem to be pitted against an their own puny existence. And despite the evident twinkle in Sullivan’s eye, a sense of tension, even menace seems to lurk below their delicately rendered surfaces.

For example in ‘Master’s Voice’ a transistor radio – the residue of a bygone era – is rendered disproportionately large next to a miniscule transmission tower and a man trapped in stocks – a medieval and colonial method of torture and public humiliation. This work offers an ironic commentary on traditional tools of communication and suggests a return to a regressive order – a pertinent warning, particularly within the context of South Africa’s controversial Secrecy Bill. But there is nothing didactic about Sullivan’s paintings.

Ironic, whimsical and – in parts – almost Dystopian,  they are visual non-sequiturs in which the element of surprise predominates, much like the Surrealist refrain of the “chance encounter of a sewing machine and an umbrella on a dissecting table.” 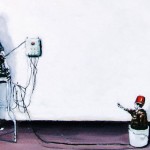 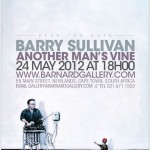 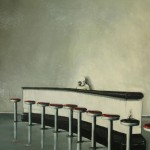 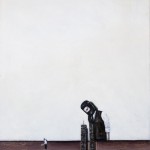 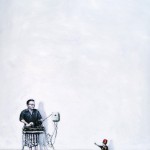