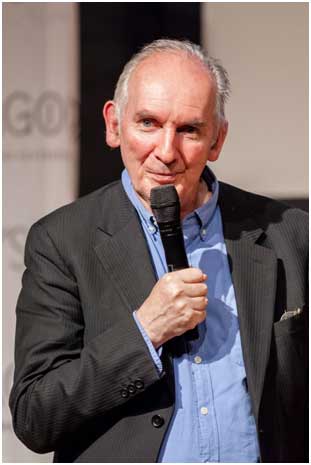 The Fall of Gondolin, is the latest “rediscovered” novel from J.R.R. Tolkien. The world’s most influential fantasy author had originally intended to publish three prequels to the famous The Lord of the Rings trilogy.

The recently released The Fall of Gondolin is the third and last of these prequels, the second being Beren and Lúthien, while the first was The Children of Húrin. The Guardian notes that all three of these prequels were edited by Christopher Tolkien, the acclaimed fantasy writer’s son, who assembled the novels using the author’s detailed notes. Another thing that these three prequels have in common is that they’ve all been illustrated by Alan Lee, an artist who’s become synonymous with Tolkien’s work.

In fact, Lee has been illustrating the published works of J.R.R. Tolkien for the last quarter of a decade. Before working on the three prequels – also known as Tolkien’s three great tales from the Elder Days – CBC recalls that Lee was also the lead concept artist in Peter Jackson’s movie adaptations of both the Lord of the Rings and The Hobbit. And before that, Lee was Christopher Tolkien’s chosen illustrator for the lavish, 1992 edition of the original Lord of the Rings series – released on the centenary of J.R.R. Tolkien’s birth. In short, it would be a massive understatement to say that Alan Lee had a hand in crafting the modern world’s conception of Tolkien’s universe. Without Lee’s vision, the fantasy world of J.R.R. Tolkien would not be what it is today – arguably the single most influential fantasy series of the last century.

No less than the iconic George R.R. Martin – rock star author of Game of Thrones fame – can attest to the influence of Tolkien’s work. An interview with io9 he reveals how the now-famous unexpected deaths in both the book and television series versions of Game of Thrones was inspired by Gandalf the Grey’s death in The Fellowship of the Ring. It’s not surprising that today’s most successful fantasy author is referencing Tolkien in his work. The Hobbit and The Lord of the Rings, along with Tolkien’s other work, set the foundations for the fantasy genre. Indeed George R.R. Martin’s work now sits at the same cultural level as Tolkien’s, and his creations have also made their way into pop culture across many mediums. The Slingo game Game of Thrones – 15 Lines takes elements from the series that, like Tolkien’s hobbits, have become part of the fantasy lexicon and recognisable worldwide. Fans of both writers can access their fantasy worlds in multiple ways, which is why both have become internationally famous. Unlike Tolkien however the will be much more work from Martin, who still has to finish his fantasy series.

For Tolkien fans who are lamenting the last work of the author, there are still ways to celebrate. We reported how the Hobbiton Movie Set and the annual International Hobbit Day events have increased tourism in New Zealand. An interesting note is that the film set, which is now a permanent feature, was designed by Alan Lee himself. Lee was an artist who truly shaped Middle Earth with his visionary work and with The Fall of Gondolin it is the last time to see these two visionaries together.