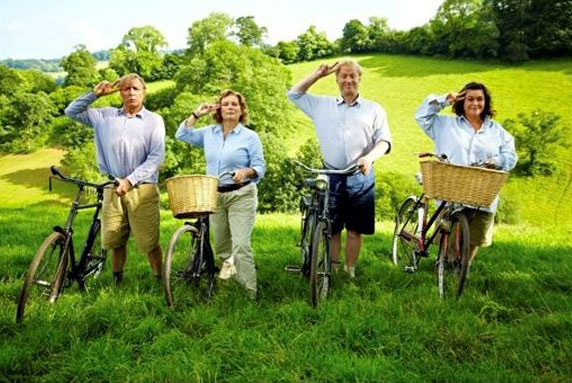 Three decades after the renowned Five Go Mad in Dorset, Jennifer Saunders, Dawn French, Peter Richardson and Ade Edmondson return to celebrate 30 years of the series, with The Comic Strip Presents ‘Five Go To Rehab’, which premieres on 7th November on Gold at 9pm.

The famous children’s characters have been brought back from the past to confront today’s modern world, but this time they must account for their outmoded racist and sexist views. But the quintet seem blissfully unrepentant as they gather for a reunion on Dick’s birthday in leafy Dorset – still a magical land of rolling hills, woods, ruined castles and dodgy villains in big black cars.

Dick (Ade Edmondson) has changed little since those early years and is now Assistant Manager for Plasmold, a plastic guttering company in Dorking. Eager to rekindle the joys of their Famous Five youth, he has engineered a few surprises for their reunion. However the others are not as keen to revisit their past. George (Dawn French) is a struggling alcoholic with a string of ex-husbands behind her and only faithful Timmy by her side. Julian (Peter Richardson) having disappeared to Equatorial Guinea for many years, apparently working for a dubious ‘charity’, is now also in need of a stint in rehab. Anne (Jennifer Saunders) the pretty shy one never did become the ‘perfect housewife’. Now a militant feminist / animal rights campaigner, she lives life on the edge of a nervous breakdown.

The famous five are met along the way by a number of familiar faces. Robbie Coltrane returns as a guest house landlady and lecherous Gypsy. Stephen Mangan plays a sexually charged actor, eager to impress Anne and Nigel Planer returns as a police inspector and sinister barmaid. Rik Mayal plays an evil villain who is determined to decapitate a terrified Julian and Daniel Peacock also makes an appearance as snubbed Toby Thurlow who has had 30 years to plan his revenge on the famous five.

Five Go To Rehab was created by the award winnings writers Peter Richardson and Pete Richens who wrote the original Five Go Mad in Dorset film and have since collaborated on many of the Comic Strip films including The Strike, A Fistful Of Travellers Cheques, Four Men In A Car and more recently the highly acclaimed The Hunt for Tony Blair. Five Go to Rehab was directed by Peter Richardson and produced by Nick Smith who also produced The Hunt for Tony Blair.